Another busy week at EPA. The week started in Oklahoma City, as EPA Administrator Scott Pruitt hosted the Council of Environmental Cooperation with officials from Canada and Mexico as part of the North American Free Trade Agreement (NAFTA). Administrator Pruitt followed this up with a visit to the Casmalia Resources Superfund site in Southern California to announce $60 million in cleanup funds. Finally, a visit to EPA Region 9 office to meet with employees and engage with the California Air Resources Board regarding CAFE standards.

On Thursday, Administrator Pruitt Signed The “Historic” $60 Million Cleanup Of The Casmalia Resources Superfund Site In Santa Barbara County, California. “As part of the historic announcement, EPA Administrator Scott Pruitt was on-hand to sign the final paperwork, which officially signals the beginning of the cleanup project. “’Over the course of the last year, EPA has taken action to accelerate remediation efforts at Superfund sites across the country, including the Casmalia Superfund site,’ said EPA Administrator Scott Pruitt.” (KEYT3, 6/28/18)

After Languishing On The National Priorities List For Almost Two Decades, Administrator Pruitt’s Commitment To The Superfund Program Has Similarly Expedited Cleanups Across The Country. “Since his appointment by Donald Trump, Pruitt has pushed to accelerate action on the nation’s hundreds of superfund sites.” (Santa Barbara Independent, 6/28/18) 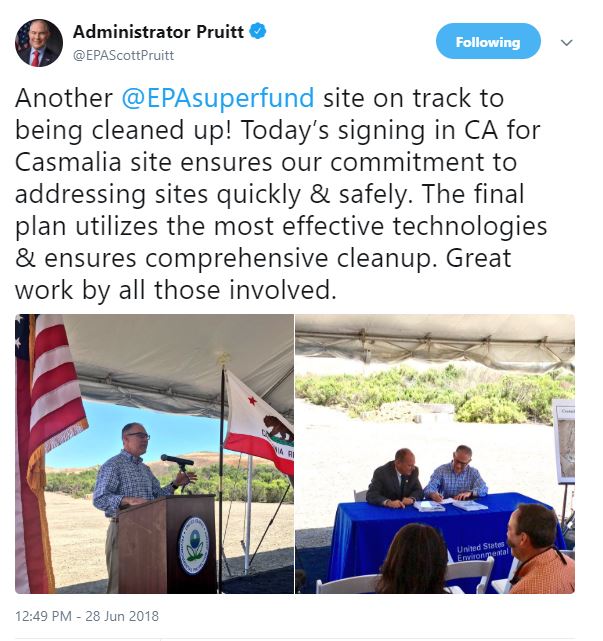 On Friday, Administrator Pruitt Wrapped Up The Week In San Francisco Meeting With CARB And EPA Region 9 Employees, They Discussed CAFE Standards And Recent Natural Disasters Within The Region. “EPA Administrator Scott Pruitt met this morning in San Francisco with Mary Nichols, head of the California Air Resources Board, about greenhouse gas standards for light-duty vehicles… The EPA boss will also gather ‘with the hardworking staff at EPA Region 9 to discuss a variety of topics, including air and water quality issues, Superfund sites in the region, and EPA's response to extreme events — like wildfires and volcano eruption,’ Daniell said in an email. Pruitt acknowledged he and Nichols have had their differences. But he said the get-together went well, invoking cooperative federalism, a focu

This Week, Administrator Pruitt Hosted His Counterparts From Canada And Mexico At The Annual Meeting Of The Commission For Environmental Cooperation To Continue To Promote Environmental Stewardship In North America. “Environmental Protection Agency Administrator Scott Pruitt played host at the event, welcoming his counterparts from Canada and Mexico. ‘Issues we have with respect to water quality and air quality and how we can work together to improve those are terribly important,’ Pruitt said. ‘These conversations are not just academic. They are to raise awareness and to talk about ways to tangibly advance the environment in our respective countries.’ The Commission for Environmental Cooperation is designed to support cooperation among the North American Free Trade Agreement partners to address environmental issues. The group is part of the North American Agreement on Environmental Cooperation, which was developed at the same time as the free trade agreement.” (The Oklahoman, 6/27/18) 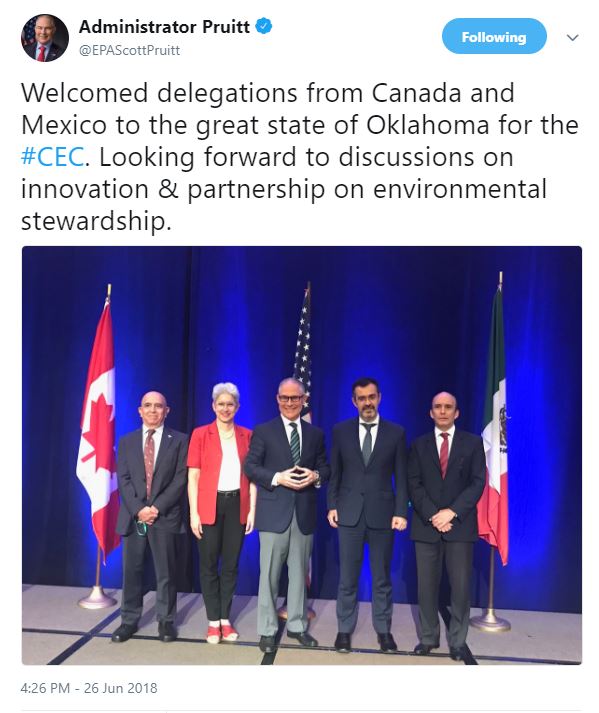 Earlier This Week, EPA Held The Inaugural PFAS Community Engagement Event In Exeter New Hampshire Bringing Together Over 200 Community Members, State Partners, And Key Stakeholders To Take Action On This Family Of Chemicals. “The New England gathering, which included both a public forum Monday and a series of workshops Tuesday involving environmental officials from the states, the federal government, municipal officials and others, is being held at Exeter High School in Exeter, New Hampshire. More than 200 people from the region attended.” (Bennington Banner, 6/25/18)

EPA Also Announced The Next Three Community Engagement Events This Summer In Horsham Pennsylvania, Near Fountain, Colorado, And North Carolina To Hear Directly From Communities Across The Country Impacted By PFAS. “[O]fficials from the agency will host a meeting in Horsham next month regarding local drinking water contamination… ’Building on the excellent event the Agency held in New Hampshire, we look forward to traveling to additional communities to hear directly from those impacted by these chemicals,’ EPA Administrator Scott Pruitt was quoted in the release.” (Bucks County Courier Times, 6/27/18) 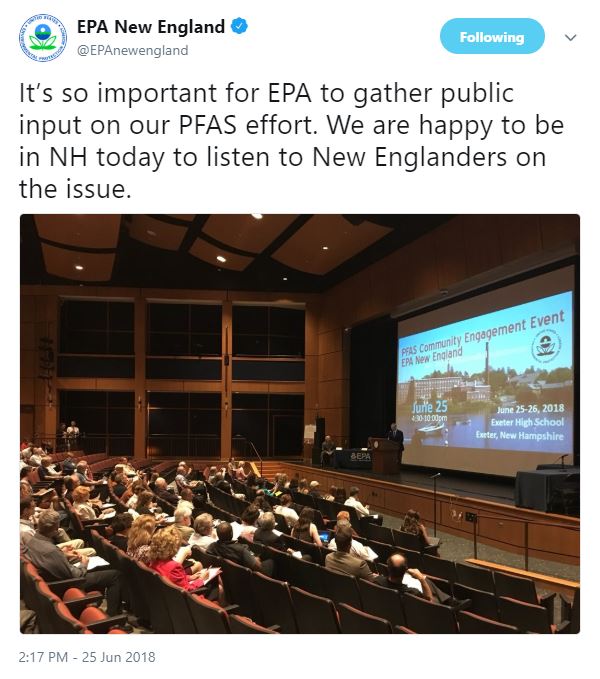 On Wednesday, Administrator Pruitt Proposed To Reform The Agency’s Permitting Process, Which The Previous Administration Had Abused To Stymie Economic Growth. “‘I am concerned that the mere potential of EPA’s use of its… authority before or after the permitting process could influence investment decisions and chill economic growth by short-circuiting the permitting process,’ he wrote in a four-page memo he signed Tuesday. Mr. Pruitt is ordering EPA’s Office of Water to relinquish authority the agency has had for about 40 years under the Clean Water Act of 1972 to prohibit some approvals by the Corps even before a developer formally applies for them, or to throw them out years after they were granted—even after a project is complete and operational.” (The Wall Street Journal, 6/27/18)

On Wednesday, EPA Announced Over $9 Million In BEACH Grants To Over 35 States, Territories, And Tribes, These Grants Will Help Eliminate Water Pollution Near Our Nation’s Beaches. “‘Enjoying the beach is a quintessential pastime for Americans every summer,’ said EPA Administrator Scott Pruitt. ‘Through EPA’s BEACH grants, we are ensuring communities across the country can keep their beaches safe and enjoyable for all.’ Grant funding under the BEACH ACT is part of a broader EPA effort to find and eliminate sources of water pollution that contribute to beach closures. Nationally, EPA plans to award up to $9.3 million in total to 35 states, territories and tribes.” (ABC4, 6/27/18) 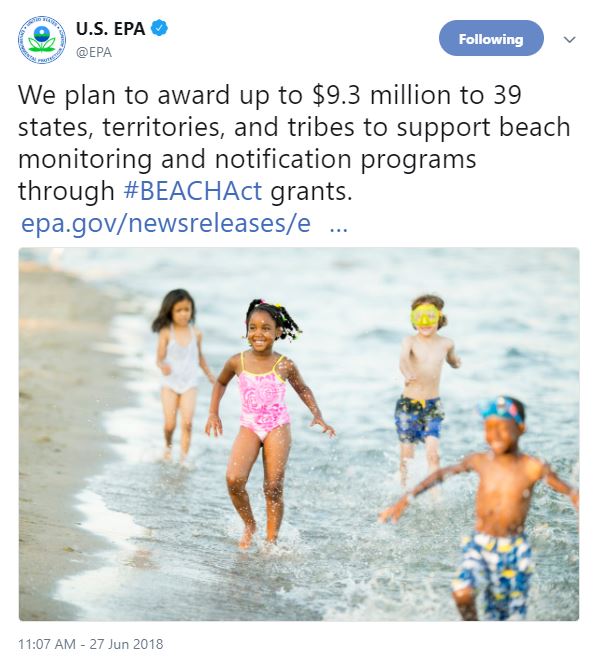 As Bloomberg Reported, EPA Announced Its Proposal To Increase The Biofuels Quota For The Renewable Fuel Standard. “Refiners would have to blend 19.88 billion gallons of biofuels into petroleum next year under an administration proposal set to be unveiled Tuesday, as President Donald Trump tries to strike a balance between two competing constituencies. The Environmental Protection Agency is set to maintain a 15 billion gallon quota for conventional renewable fuels such as corn-based ethanol, even as it gives a modest 3.1 percent increase to overall biofuel-blending requirements in the proposal set to be unveiled Tuesday. The 2019 target for advanced biofuel would be 4.88 billion gallons, including at least 381 million gallons of cellulosic renewable fuel, such as ethanol made from switchgrass. The EPA is also set to propose a 2.43 billion gallon quota for biodiesel in 2020, a 15.7 percent increase from the 2.1 billion gallons required in 2019.” (Bloomberg, 6/25/18)