It’s been a busy week at EPA. On Monday, EPA Administrator Scott Pruitt unveiled our new Office of Continuous Improvement to ensure best practices are being utilized to deliver results for the American people. On Tuesday, at a meeting with water sector associations, Administrator Pruitt announced that the deadline to apply for a WIFIA loan had been extended. And on Thursday, the Administrator signed a proposed rule to reform the Agency’s Risk Management Program, which would save $88 million in regulatory costs annually. See below for all the actions that happened this week at EPA...

Many of the links on this page exit the site. Exit Please see EPA's third-party web site disclaimer for more information.

On Monday Politico reported on EPA’s New Office of Continuous Improvement, “which will boost productivity by cutting programmatic and operational waste.” “EPA Administrator Scott Pruitt announced today he is creating a new office inside the agency to boost productivity by cutting programmatic and operational waste. The Office of Continuous Improvement will work to expand EPA's "lean management system" to 80 percent of the agency by 2020. EPA's lean management webpage identifies inefficiencies caused by issues such as reworking documents that lack necessary data, ‘excess email messages,’ time spent traveling to meetings and even printers and copiers. The OCI will be run by Serena McIlwain, a career official who formerly was assistant regional administration for EPA's Region 9 in San Francisco. EPA's ‘lean’ activities previously had been run by Henry Darwin, the chief of operations who was brought to EPA last year after implementing a similar program for Arizona's state government.”

On Tuesday, Administrator Pruitt informed state governors the application deadline for WIFIA water infrastructure loans had been extended, as reported by Bloomberg Environment. "Water utilities now have additional time to apply for low-cost loans from the EPA, as the agency is extending the deadline for a new infrastructure financing program by nearly four weeks. The deadline to apply for loans through the program, which is known as WIFIA, has been pushed back from July 6 to July 31. Scott Pruitt, the administrator of the Environmental Protection Agency, sent a May 14 letter to governors and heads of territories informing them of this move. The agency recently finalized a more than $130 million loan to a water utility in Seattle for a new facility that will treat stormwater runoff as part of the loan program. In total, the EPA expects to grant more than $2 billion in water infrastructure loans in the inaugural round of financing."

West Hawaii Today reported that EPA is sending Air Quality Monitors to Hawaii Island in response to the Kilauea Volcano Eruption, EPA staffers are on the ground. “The U.S. Environmental Protection Agency has deployed emergency responders and air monitoring equipment to Hawaii Island as part of the Federal Emergency Management Agency’s response to the Kilauea volcano eruption, according to a press release from the EPA. The EPA is also sending experts to analyze public health threats from volcanic gas emissions and to assist with data management support. The EPA is augmenting the multi-agency air monitoring efforts of acute threats to public health from the emission of volcanic gases. The agency is also working with the Hawaii Department of Health staff to evaluate locations for additional air quality monitoring stations, as well as to to integrate the multi-agency air quality data collection efforts by US Geological Survey/National Park Service, County of Hawaii, state Civil Defense and state Department of Health. EPA has deployed four staff and will mobilize additional equipment and personnel to support 12 monitoring stations for sulfur dioxide, hydrogen sulfide and particulates and support DOH requests for assistance in collecting, managing and interpreting air monitoring data.”

On Thursday, Administrator Pruitt announced a proposed rule to reform the Agency’s Risk Management Program which will save $88 million annually in regulatory costs according to the Washington Examiner. “Scott Pruitt, administrator of the Environmental Protection Agency, proposed Thursday repealing major parts of a chemical safety rule finalized in the last days of the Obama administration. ‘Accident prevention is a top priority at EPA, and this proposed rule will ensure proper emergency planning and continue the trend of fewer significant accidents involving chemicals,’ Pruitt said Thursday in a statement. ‘The rule proposes to reduce unnecessary regulatory burdens, address the concerns of stakeholders and emergency responders on the ground, and save Americans roughly $88 million a year.’ EPA claimed the repeal of these components of the rule will produce between $87.9 million and $88.4 million in cost savings.”

EPA’s Office of General Counsel held an “Open House” with stakeholders which provided an opportunity for the Agency’s attorneys to engage with the regulated community, as reported by  Politico. “EPA touted a meeting between general counsel Matthew Leopold and senior representatives from eight industry groups on Wednesday in a release from the agency. The representatives were the first to meet with Leopold during an ‘open house’ forum to learn about his priorities and the legal issues facing EPA, the agency said. Leopold plans to hold additional meetings with The Environmental Council of the States, ‘non-governmental advocates,’ and state agency representatives, as well. EPA told ME the meeting included representatives from the American Petroleum Institute, National Association of Manufacturers, Information Technology Industry Council and the National Mining Association, among others.” 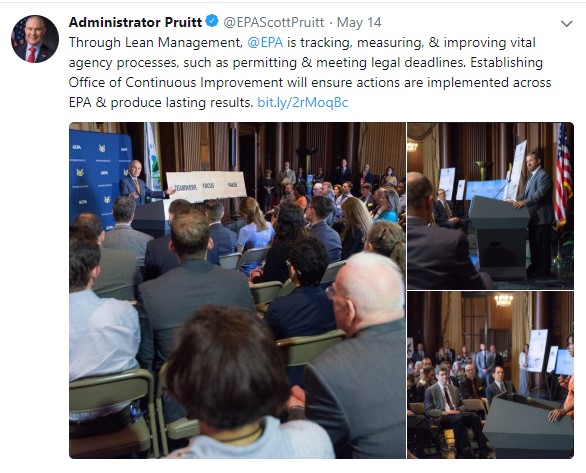 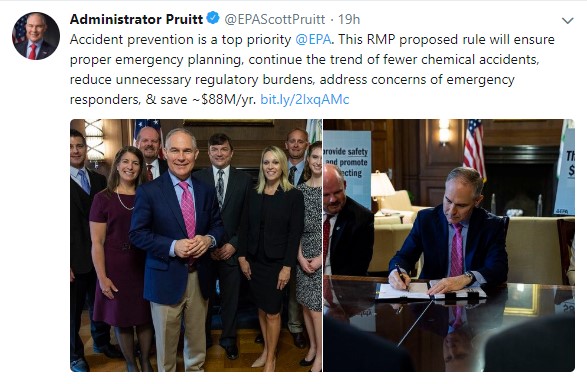 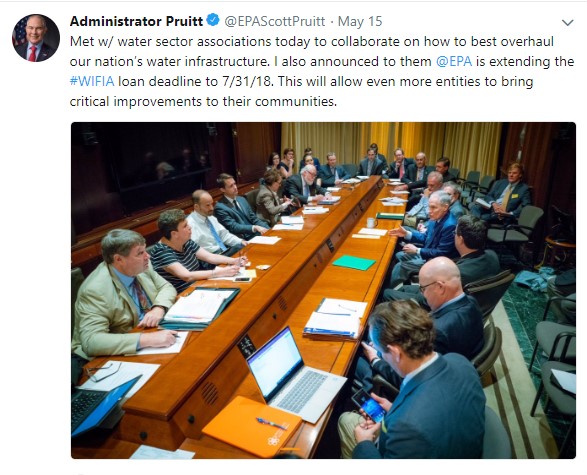 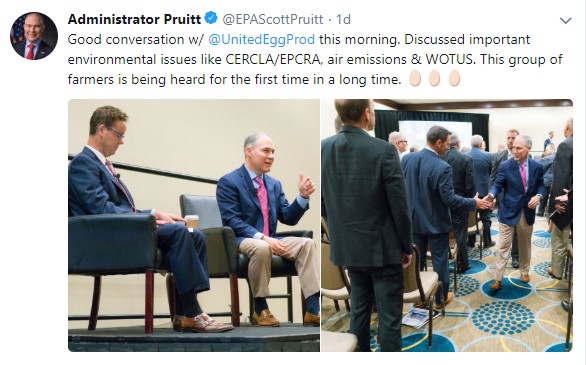