WASHINGTON (September 20, 2019)— Today, the U.S. Environmental Protection Agency (EPA) announced a Water Infrastructure Finance and Innovation Act (WIFIA) loan to the Narragansett Bay Commission (NBC) to help reduce pollutant discharges into Narragansett Bay. This project is the first WIFIA loan awarded in New England and will help protect public health and the ecosystems of the largest estuary in this region.

“This WIFIA loan will improve water quality in the Narragansett Bay, protect the health of local residents, and deliver on President Trump's commitment to upgrade our nation's infrastructure, create jobs, and safeguard public health and the environment,” said EPA Administrator Andrew Wheeler. “With this loan closing, EPA has now issued 12 WIFIA loans totaling over $3 billion in credit assistance to help finance over $7 billion for water infrastructure projects and create over 12,000 jobs.”

“We know Rhode Islanders value a clean and healthy bay. We’re very proud of infrastructure investments Narragansett Bay Commission ratepayers have made over the past two decades to mitigate the century-old issue of CSOs and the NBC is confident that this final phase of the CSO project will result in a bay that will be a beloved resource for our children and grandchildren,” said Narragansett Bay Commission Chairman Vincent Mesolella. “The WIFIA loan also ensures that the cost of this ambitious clean water project will be mitigated for our ratepayers.”

The Combined Sewer Overflow Phase IIIA Facilities project will cost $548 million. EPA's WIFIA loan will finance nearly half of that figure—up to $269 million. Additionally, the Rhode Island Infrastructure Bank (RIIB), through co-funding from the Rhode Island Clean Water State Revolving Fund (RI CWSRF) and other programs, will support a portion of the project costs. The RI CWSRF program is co-managed by the RIIB and the Rhode Island Department of Environmental Management. The WIFIA loan will save NBC an estimated $99.6 million compared to typical bond financing. Project construction and operation are expected to create 1,755 jobs.

For more information about the WIFIA program, visit https://www.epa.gov/wifia. 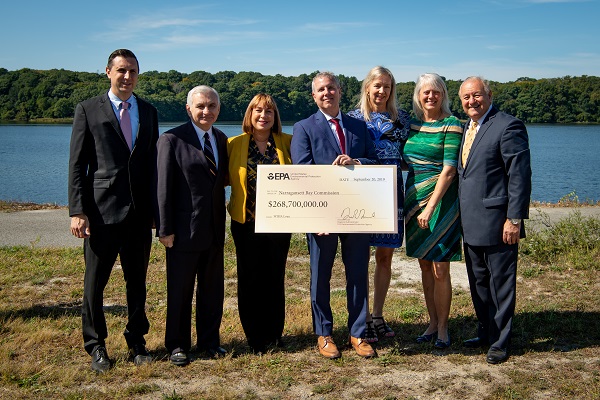