WASHINGTON (Dec. 19, 2019) — Today, the U.S. Environmental Protection Agency (EPA) finalized a rule that establishes the required renewable volumes under the Renewable Fuel Standard (RFS) program for 2020, and the biomass-based diesel volume for 2021. Through this action, the Trump Administration has fulfilled yet another key promise to the American people, American farmers and American biofuels producers by increasing biofuels volumes under the renewable fuel standard and modifying the program requirements to ensure those volumes are met. The EPA is committed to ensuring a net of 15 billion gallons of conventional biofuel is blended in 2020.

“Through President Trump’s leadership, this Administration continues to promote domestic ethanol and biodiesel production, supporting our Nation’s farmers and providing greater energy security,” said EPA Administrator Andrew Wheeler. “President Trump committed to our nation’s farmers that biofuel requirements would be expanded in 2020. At the EPA we are delivering on that promise and ensuring a net of 15 billion gallons of conventional biofuel are blended into the nation’s fuel supply.”

Under the Trump Administration, EPA has consistently increased the renewable volume obligations and continued to expand the nation’s renewable fuels sector. Through this rule, EPA has modified the RFS program by projecting small refinery relief to ensure that these final volumes are met, while adjudicating small refinery relief when appropriate. As proposed, we are finalizing a projection methodology based on the 2016-2018 annual average of exempted volumes had EPA strictly followed the Department of Energy (DOE) recommendations of 770 million Renewable Identification Numbers (RINs) in those years, including granting 50 percent relief where DOE recommended 50 percent relief. This is our general approach to adjudicating Small Refinery Exemption (SRE) petitions going forward, beginning with 2019 SRE petitions and including 2020 SRE petitions and beyond, we are committed to following the DOE recommendations. By proposing effectively 15.8 billion gallons for 2020 we will ensure meeting our target of 15 billion gallons.

The key elements of today’s action are as follows: 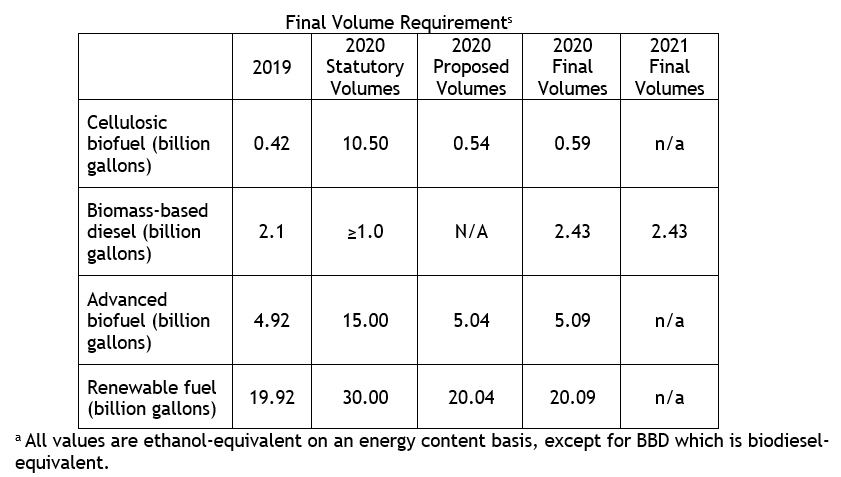 This final rule is the latest in a series of steps the Administration has taken to expand domestic energy production and improve the RFS program which will help American farmers.

Earlier this year, the Trump Administration made good on its promise to allow the year-round sale of E15 gasoline across the country. Building on the President’s earlier decision to allow year-round sales of E15, EPA is working to streamline labeling and remove other barriers to the sale of E15. EPA is also making important reforms to the Renewable Identification Number (RIN) compliance system to improve transparency and to deter price manipulation in the RIN market. These efforts will provide certainty and transparency to farmers and biofuel producers across the country.

Under President Trump’s leadership, EPA will continue to actively engage with stakeholders to expand the number of approved fuel pathways and add diversity to the biofuel mix in the United States. Since January 2017, EPA has approved 25 petitions for new fuel pathways, including a final rule in August 2018 that approved new pathways for biofuels derived from sorghum. EPA will continue to further explore opportunities to remove regulatory burdens that prevent marketplace entrance and growth to natural gas, flexible fuel vehicles, and E85 fuels.

Since taking office in 2017, the EPA under the Trump Administration has worked to provide long-term certainty and a workable regulatory environment for U.S. farmers and ranchers, including:

The Trump Administration will continue to enact sensible regulation that improves the lives of all Americans.