Another busy week at the U.S. Environmental Protection Agency (EPA). The week started in Music City, as EPA Administrator Andrew Wheeler spoke at the National Rural Water Association conference, then traveled to visit the Southside Chattanooga Superfund Site to announce the the completion of the Superfund Task Force and issue the Task Force’s final report.

On the policy front, EPA Administrator Andrew Wheeler signed a directive to prioritize efforts to reduce animal testing, and announced $4.25 million in funding to five universities to research the development and use of alternative test methods and strategies that reduce, refine, and/or replace vertebrate animal testing. Additionally, the Administrator ended a regulatory patchwork by repealing a 2015 rule that impermissibly expanded the definition of “waters of the United States” (WOTUS) under the Clean Water Act with the Assistant Secretary of the Army for Civil Works R.D. James.

Meanwhile at the 34th Annual WateReuse Symposium in San Diego, California, EPA released the draft National Water Reuse Action Plan that identifies priority actions and the leadership and collaboration that is needed between governmental and nongovernmental organizations to implement these actions.

In concert with the U.S. Department of Justice, yesterday we announced a settlement with Performance Diesel Inc. to resolve alleged violations of the Clean Air Act associated with the manufacture, sale and installation of at least 5,549 aftermarket products that defeat the emissions control systems of heavy-duty diesel engines, which included civil penalty of $1,100,000.

On Monday, EPA Administrator Andrew Wheeler released the Superfund Task Force Final Report at the Southside Lead Site in Chattanooga. “The agency's work was praised by first-year Tennessee Department of Environment and Conservation Commissioner David Salyers, who attended the event and complimented the Trump administration as well as the EPA on its "common-sense" response. The announcement took place at Southside Community Park, which was once a brownfield site — one that was contaminated, remediated and repurposed for another use — before opening as a park in 2017. “ (Chattanooga Times Free Press, 9/10/19)

Administrator Wheeler Touted the Superfund Task Force's Accomplishments and Announced Plans to Continue Program Improvements Moving Forward. “By implementing the recommendations over the past two years, the [Superfund] Task Force has helped to provide certainty to communities, states, tribes and developers that the nation’s most hazardous sites will be cleaned up as quickly and safely as possible.” (The Chattanoogan, 9/10/19) 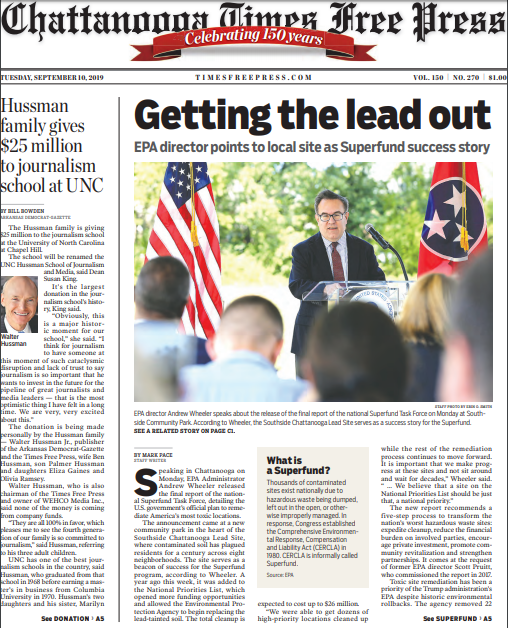 EPA Administrator Andrew Wheeler: “Today, EPA and the Department of the Army finalized a rule to repeal the previous administration’s overreach in the federal regulation of U.S. waters and recodify the longstanding and familiar regulatory text that previously existed. Today’s Step 1 action fulfills a key promise of President Trump and sets the stage for Step 2 – a new WOTUS definition that will provide greater regulatory certainty for farmers, landowners, home builders, and developers nationwide.”

Assistant Secretary of the Army for Civil Works R.D. James: “Before this final rule, a patchwork of regulations existed across the country as a result of various judicial decisions enjoining the 2015 Rule. This final rule reestablishes national consistency across the country by returning all jurisdictions to the longstanding regulatory framework that existed prior to the 2015 Rule...”

U.S. Senator Jim Inhofe (Oklahoma): “Promises made, promises kept… Today’s action to finally end the rule continues to prove how the Trump Administration and the EPA understand the needs of farmers and rural Americans.”

House Transportation & Infrastructure Committee Ranking Member Sam Graves (MO-06): “The Obama Administration's WOTUS rule was never about ensuring water quality - it was about the federal government trying to grab as much control as it could over the lives of Americans everywhere. It was a blatant overreach of the federal government, and I was appalled that farmers, small businesses, and many others were forced to comply with such far-reaching and burdensome regulations put in place by unelected bureaucrats. I commend the Trump Administration for keeping its promise to eliminate that rule and for working to provide a more certain, flexible, and realistic framework to ensure we have a healthy environment and a robust economy.”

House Energy and Commerce Committee Ranking Member Greg Walden (OR-02): “Farmers and ranchers across Oregon have expressed their concerns with the overreaching Obama-era definition of Waters of the United States (WOTUS). They worried that the intermittent stream or irrigation ditch would be subject to burdensome new federal regulation. The EPA's release of the final rule, which abolishes the Obama-era rule, is welcome news across rural Oregon. I applaud President Trump and his administration for listening to our farmers and ranchers and acting to repeal the flawed original rule and appropriately redefine Waters of the United States.”

House Agriculture Committee Ranking Member K. Michael Conaway (TX-11): “The Trump administration’s efforts to bring the scope of EPA’s regulatory activity back to interstate and navigable waters not only ensures that EPA’s mission comports with Supreme Court rulings, but also applies a common sense understanding of what constitutes waters of the U.S., providing legal certainty to all Americans.”

National Association of Manufacturers CEO Jay Timmons: “America is now one step closer to smart and balanced regulation that protects our nation's precious water resources. Courts already declared the 2015 rule illegal, following years of litigation that included a 9-0 victory for the NAM at the Supreme Court, so manufacturers are pleased to see it officially struck from the books.”

American Farm Bureau Federation President Zippy Duvall: “Farmers and ranchers share the goal of ensuring clean water, but the 2015 Waters of the United States rule was unreasonable and unworkable. It made conservation more difficult and created huge liabilities for farmers. No regulation is perfect, and no rule can accommodate every concern, but the 2015 rule was especially egregious. We are relieved to put it behind us.”

Click here to see what others had to say.

“This action officially ends an egregious power grab and sets the stage for a new rule that will provide much-needed regulatory certainty for farmers, home builders, and property owners nationwide.” Read more about the final rule from Administrator Wheeler and Assistant Secretary James in the Des Moines Register.

Administrator Wheeler and Assistant Secretary James sign the final rule at the National Association of Manufacturers Headquarters on Thursday.

EPA Administrator Andrew Wheeler Announces Plan to Eliminate Reliance on Animal Testing: “The EPA will work to replace animal research with new approach methods (NAMs) that are found to be ‘equivalent or better than the animal tests replaced’ and will ‘remain fully protective of human health and the environment.’ The department will also award $4.25 million to five universities to research alternative test methods and strategies. ‘This is an effort that the agency will undertake over the next 16 years to improve the science we use for scientific decision and eliminate the need for animals tests,’ Wheeler said at a press conference. ‘This is a longstanding personal belief on my behalf.’” (Washington Examiner, 9/9/19)

The Move Was Cheered by Animal Rights Groups, Who Attended the Signing at EPA Headquarters.

White Coat Waste Project President and Founder Anthony Belloti: “White Coat Waste Project and its over 2 million supporters applaud Administrator Wheeler and the Environmental Protection Agency (EPA) for unveiling the most comprehensive and aggressive plan in U.S. history to cut wasteful animal testing, a move supported by a supermajority of Americans from all parties.”

Humane Society Legislative Fund President Sara Amundson: Under Administrator Wheeler’s leadership, EPA continues to forge a pathway to end decades of reliance on conventional animal tests as predictors of risk to humans and our environment. By setting bold goals for EPA-related testing, the agency can help drive science forward - creating a more humane and predictive paradigm for chemical safety assessments.” 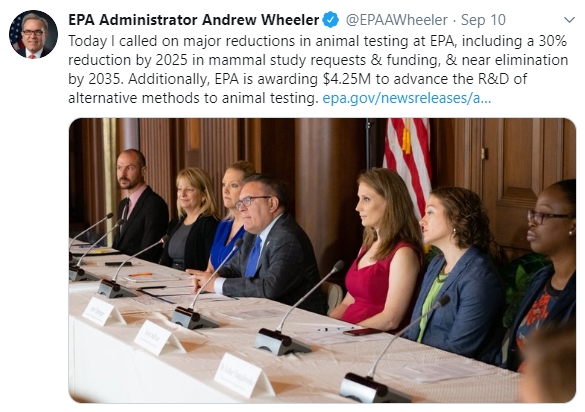 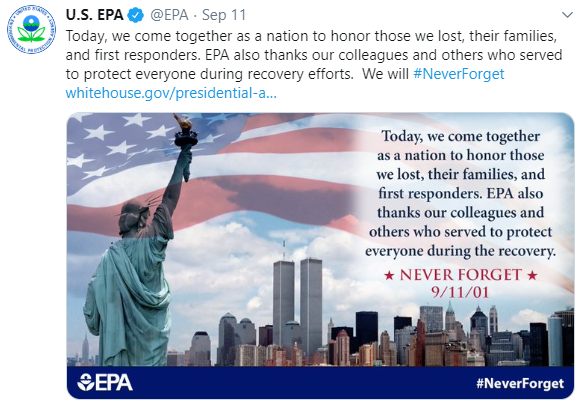 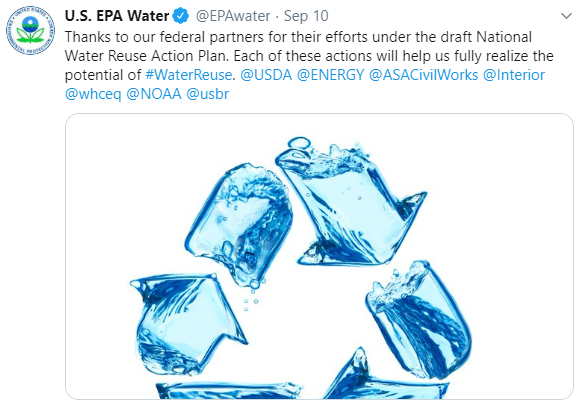 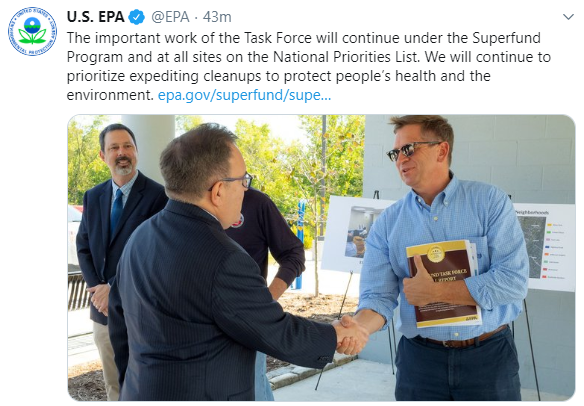