ALWAYS CALL 911 if you are in immediate danger and need emergency help.

Volcanic gases that pose the greatest potential hazards are sulfur dioxide, carbon dioxide, and hydrogen fluoride. Locally, sulfur dioxide gas can lead to acid rain and air pollution downwind from a volcano. These gases can come from lava flows as well as a volcano that erupts violently.

Volcanic ash can travel hundreds to thousands of miles downwind from a volcano. Fresh volcanic ash is gritty, abrasive, sometimes corrosive, and always unpleasant. Although ash is not highly toxic, it can trouble infants, the elderly, and those with respiratory ailments. Ash can also get in your eyes and scratch them, especially when it's windy. Ash can be hazardous to grazing livestock and can damage or force the shutdown of drinking water and wastewater treatment facilities by clogging or damaging equipment.

Prepare for a volcanic eruption

For water and wastewater facilities:

Recover from a volcanic eruption

How does EPA respond to volcano eruptions?

In its mission to protect human health and the environment, EPA may be involved in the monitoring of environmental conditions, assessing potential health impacts, or responding to hazardous materials emergencies that may arise as a result of an eruption.

Human Health Impacts - EPA has considerable expertise on the potential health impacts from ash or chemicals released from volcanoes. Toxicologists and other specialists may be needed to evaluate environmental conditions and effects on populations surrounding the mountain.

Emergency Response - EPA may be called upon to provide support to initial responders to an eruption event. For example, in the fall of 2004 a Unified Command was established for Mount St. Helens which was then showing increased activity. The Command included the U.S. Forest Service (lead agency), U.S. Geological Survey, and state and local authorities. EPA joined the Unified Command in an advisory and support role, and was prepared to provide support with GIS mapping and analysis, air and water monitoring and modeling, and other services to aid in the overall response. 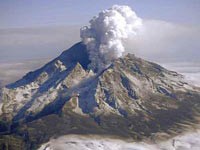